Grabbing the keys, camera, notebook and hitting the GPS, this girl is off for yet another adventure! Where this time, you ask? Birmingham Alabama and Iron City Billiards, this massive 22,000 square foot building houses twenty-eight seven-foot Diamond tables with an additional ten nine-foot Diamond tables; perfect for the avid pool enthusiast. Owner Michael Catanese has a few other establishments, but this is one of his newest endeavors. As you walk into this grand entrance, columns in red brick are holding up the smoking area. Entering to the right the action begins with a sea of blue clothed Diamonds! I mean, diamonds are a girl’s best friend. Turning to the slight left you get the feel of separate arenas, one to the left then right, the bar separating two battle grounds for this weekend’s events. Menus providing food during this long grind to the finish and a decent bar to take the edge off. Catanese states, he is learning more about how to accommodate the player and future patrons, this weekend has taught a lot. “That’s why we are here, to keep pool active and make sure we all have a good time this weekend”, says Mike. Just a week prior to the Iron City Open a tornado touched down in the area, some damage to the exterior of the building; the important part was no one was injured in the aftermath. Catanese was determined to not let the players down. He rushed to repair and re- open! We appreciated all the hard work of all the staff and Mike, it was a great venue, this girl will be back! Iron City is set on top of a small hill at 800 Gadsden Hwy with an enormous parking area, near many hotel options and places to eat, also to exit the parking area was easily accessible onto the interstate. 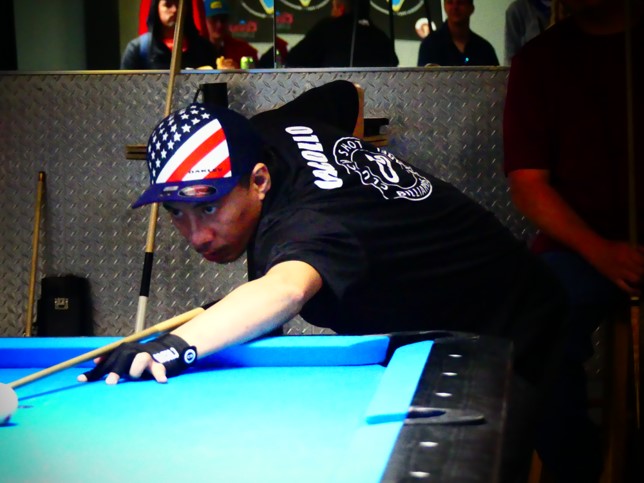 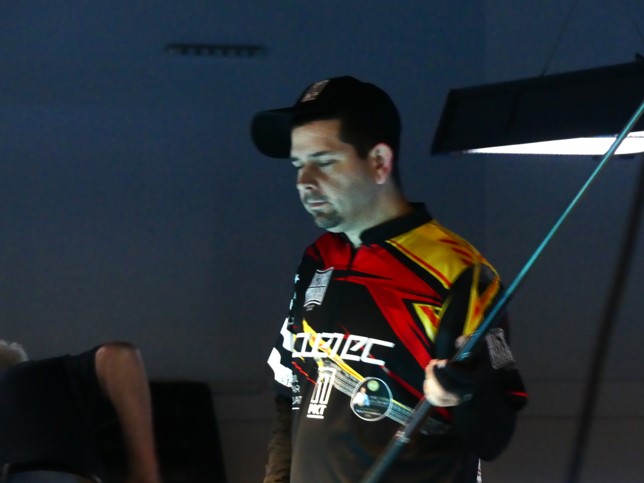 After a good night’s sleep and a cup of coffee, it was time to see what went on overnight. Finding my seat next to the Arena table, you see Dennis Orcollo warming up with sightings of Billy Thorpe; heavy heat in this room so early, at 11:00 in the morning, well early for all of us that stayed late the night before. Brackets posted, players begin the match-ups, enters Nick De Leon. Have you ever met a person whose spirit exudes them? That may sound a little strange, but that is exactly how it was when a girl with a camera met Nick De Leon, “NikonKid”. Pool case in hand, Cuetec sponsored jersey with his name across the back in large bold letters, he is obviously standing in the way of the tv table.” How rude”, thinking to myself, asking in my most southern tone,” How much did it cost you to have your name put across the back of your jersey?” Replying with a smile, “They just gave it to me, even put my name on it, still trying to understand why? Now, how did this Arizona bred player end up in Birmingham Alabama? Needing my candy fix before grilling De Leon, searching for dollars for the vending machine he sees my annoyance, telling this sad story of my search for change to get skittles out of the vending machine -this happens; laughing while unzipping his pool case then exposes the most massive stash of Hi-Chews you have ever seen! Instant friendship and a great pile of information from this professional out of Peoria Arizona.

De Leon has been playing for twenty years, during this time he has placed in the top 15, mostly in the west; father of two while working full time in Casino Management makes you wonder how this guy plays? Sitting front and center of the unexpected show of the weekend begins, here is why; Dennis Orcollo and Nick De Leon face off on the Arena Table, De Leon on a run with a 5/2 lead on Orcollo the pressure was on Dennis, Nick looked unphased playing this Filipino Champion. With a critical miss and some unfortunate mistakes, De Leon passes the win over to Orcollo with the final score being 9/7; Dennis whispering, “I thought you had me.” So, did Nick De Leon buy his patches for his jersey? That is a definite NO! Great shooting, Nick! If you get the opportunity to sit down with this gentleman, it is advised to bring a pen and paper. This guy would make a great mentor to go along with his billiards passion.

Iron City held a collective of great Professional players on the weekend of April 2nd, 2021 ranging from a Filipino invasion to semi local Professionals like Johnathan Pinegar or Hennessee from Tennessee. Pinegar has been playing pool for most of his life, ranging from APA to BCA in the Junior leagues then professionally to date, a native of Manchester Tennessee, his father Billy Hennessee helped cultivate the player you see today, as well as other influential players. 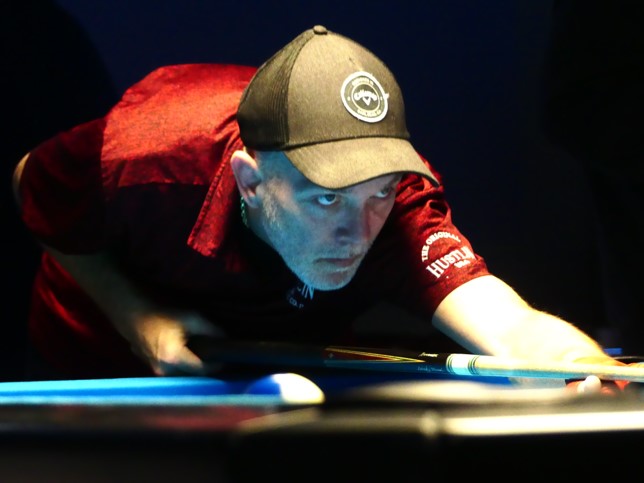 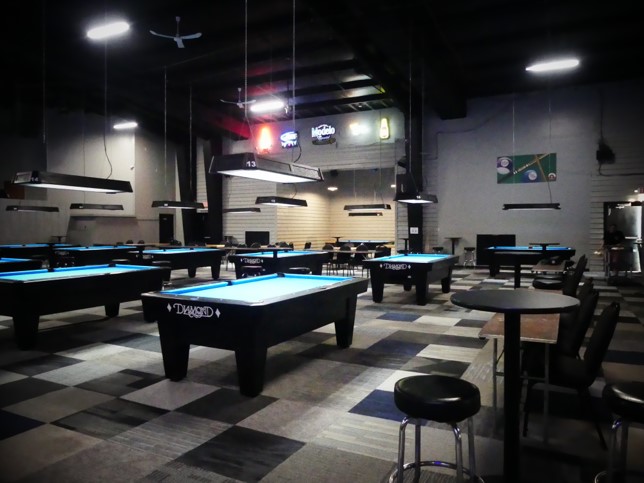 Prior to the Covid Pandemic, his recent accomplishments are ranging from Super Billiards Exp 2019 winning an open event to Scotty Townsend Memorial 2018 ring game winner and smaller tournaments around the south; speaks for itself in the type of competitor you will meet on the table. This brings us to this amazing weekend of 9 ball, Pinegar is sent to the loser’s side right out of the gate which slides him into the long grind until the end. You are thinking, “All of us have to grind it.” Several years ago, Pinegar was involved in a motorcycle accident that could have ended his life, breaking 28 bones in his body, and leaving him with metal, screws and bolts holding his spine and neck together.

“How do you feel after these long sessions?” his response, “You learn to live with it, after learning how to walk, hold your head up by yourself and just everyday things, I’m thankful to be alive. It gets painful sometimes, but you do the best you can, It’s just another day at work for me.” Hennessee ends up grinding through a field of 140, playing some of the best pool I have seen him play since before the pandemic, taking out big names like Jeffery DeLuna. Johnathan finished 3rd losing to Devin Poteet in the 9 ball Open event this weekend. They do not call this man the grinder without reason.

Devin Poteet put a beat down on some of our best players. After staying up until six o’clock on Monday morning, takes home second place. Poteet travels from Paragould Arkansas, father, husband and employed full time, this man turned some heads with the showing he put on the table this weekend. Rumor has it Devin can run with the best of them out of his area and here; it showed this weekend while blazing through the bracket to meet Dennis Orcollo from the other side, where he was defeated. Keep your eye on Arkansas, guys, and gals. Ending the tournament with a trifecta sweep at The Iron City Open, Dennis Orcollo, who was seen dancing to the Brass Monkey at one point being hyped up by none other than Nick De Leon, during his match. This tournament was a four-day tournament which included a women’s, one pocket, ten ball, and the nine-ball open.

Packing up my camera, dropping off players and recounting the events of the past two days it occurs to me that with some effort, humbleness, and gratitude you can pull off a tournament regardless of limitations. Iron City Billiards was put to the test this weekend, and it passed; this columnist has nothing negative to report. The sunny drive home had me thinking, though, where to next? Only the next flyer knows. Special thanks to Mike Catanese and LJ Stewart for the invite to Iron City Billiards and giving me the opportunity to see what new was coming out of Birmingham Alabama, my home state.

This reporter stayed at the Courtyard Marriot in Trussville, a suburb of Birmingham Alabama it was just down from the interstate without the noise of traffic, soft beds and quiet room with great staff, if you are in the area needing a place to stay, I would most definitely recommend The Courtyard Marriot in Trussville. Be sure to follow me on Facebook at Inside America’s Pool Rooms with Tracy Lerma, do not forget to subscribe to our YouTube Channel!