The Texas Open brought in a wide range of players and one female player stands out in the crowd, Ming “The Empress” Ng, her larger-than-life personality along with her heart of gold puts her right up there on my list of exceptional players. This humble forty-nine-year-old Hong Kong China native arrived in the United States around the age of eight. Not knowing the language well, it was a daunting task in schools especially being the only Asian child in a mostly minority school kept her quiet, this reporter knows this well, being from a Hispanic family myself.  Keeping to herself and studying her surroundings, she found her way, but the fast-paced institution wasn’t exactly helpful, so she broke free to grab her GED around the age of nineteen. Ming’s family lived a modest life but moving to a new country gave them the opportunity to improve their lives as the years passed.  Currently, the family has spread out over the years like most families do, so the pool community has become “family to me” she explains. 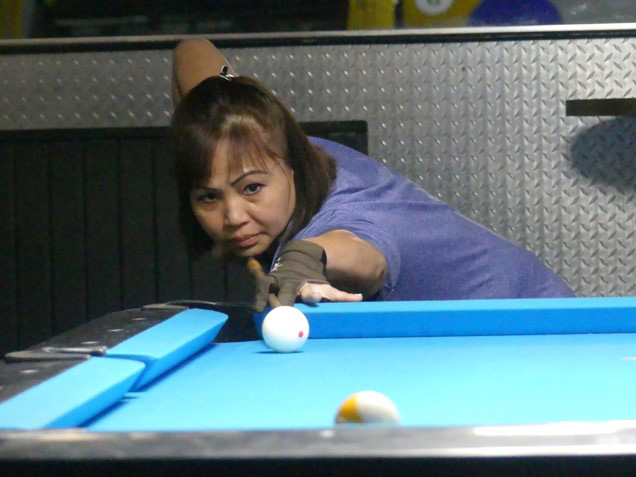 Empress is defined as a woman who is a sovereign ruler of great power and rank, especially one ruling an empire. Ming has been known to take down many tournaments, including winning the Texas Open Women’s event several times in the past, she explains; makes her “Empress” status well earned. Picking up a cue and hitting her first ball at the young age of fifteen at a local bowling alley was her first introduction to the game, unlike some players, her love for the game was completely by accident.  Ming admits she enjoys rotation games the most, but any game is fun for her due to each one has its own strengths. The Empress has been playing with a twenty-five-year-old Predator P2 with a 314 shaft which was given to her in 1997; when you find something that is an extension of yourself you keep it!  When asked if she had an influential player her reply was simple, “Allison Fisher, always has been my favorite female player. She is classy, you just can’t teach class.” With no practice regime due to an underlying issue, she says she finds her stroke during the tournaments, claiming the lack of practice was what she feels was why she could have fared better in Round Rock. “It’s just another day on the tournament grind. I don’t expect much, if I win, I win.” she says humbly. Ming, much like myself, enjoys her home life and dabbles in online poker when she has the free time. Living her life day by day, she has no aspirations for her billiard career currently claiming, “You never know what will happen in pool, so I just live my life.” Asking her if she could go back and give herself advice and to the future players she says it simply, “Build yourself in education, pool is so widespread there just isn’t enough meat on the bone to spend it only in this career path, so find something else that sparks your interest. Make sure to become a role model for these younger players, teaching makes the players better and it’s about giving it back to move it forward. In order to have this sport promoted in a positive light, we must coach these kids to present themselves respectfully and humbly on and off the table. You never know who could be watching you.” As I come to the end of this interview, it becomes clear to me that the people who we encounter do care about our sport, not only for themselves but for the future of this game we love so much. It was an absolute pleasure speaking with Ming, like all the other wonderful players that have been introduced into my life since the beginning of the journey to save our pool rooms.

Much love, my sweet friend and thank you for the interview!