Walking into any professional tournament you always seem to meet the most fascinating players, who else would a girl want to write on but Josh “The Beast” Roberts. Roberts originally from Boston Massachusetts has been on the tournament scene lately burning up the One Pocket events with top finishes. This reporter first met Josh at The Derby City Classic in Elizabeth Indiana by accident, ran straight into him as I was turning around, almost knocked both of us on the ground in front of Tony Hargain’s Hustlin USA booth which Roberts is sponsored by. Lucky for this quirky blonde, Roberts has a great demeanor. Let’s move forward to the present day, shall we? The past year Josh has been circulating throughout the southeast hitting some of the best tournaments, The Buffalo’s Classic, The Iron City Open and The Texas Open which is where the opportunity to chat with him between matches, eating and checking in with his family arose. Searching through the internet, finding very little on Roberts besides finishes in tournaments, this gave me a goal. This amazing player needs more than just a placement finish post and this columnist was up for the job! Who is Josh Roberts? With his signature smile and a humble reply, “Grab a seat and let’s give you a story!” 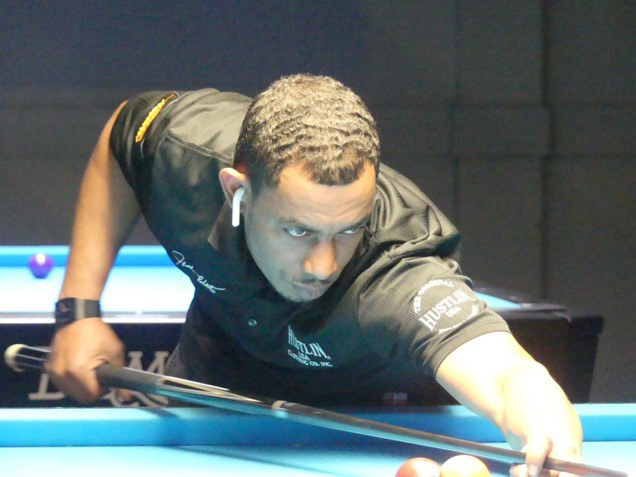 Forty years ago, Boston Massachusetts welcomed Josh “The Beast” Roberts into the world, being one of four children kept his mother busy, Josh explains. “We went down to the local pool room to keep busy and out of trouble, it wasn’t until we moved south (I was around fourteen) that we gained a table in our home. This kept all of us busy, but for me a passion for the game surfaced. I was a late starter in this career at twenty-seven, it wasn’t until my first tournament that I realized my game needed improving. I’ve not stopped pushing myself to improve since.” This is an understatement if you ask me, Josh has been tearing up the south for almost a year tournament wise. A father of five with his youngest under the age of three, this amazing player is seen taking time out during a tournament grind to call and check in. “I try to spend all of my free time home with my family, the kids grow up so fast and I hate to miss those milestone moments.  When I’m not on the road following my career, I’m home with them” says Roberts. Humble, honest, and down to earth Roberts was beside himself when this curly haired reporter asked, “Who are you?” True to form, Roberts smiles and simply said, “I’m a man who loves the game and One Pocket is on my list right now. I keep coming in second, it’s time to snap a few of these off before the end of the year.” A girl must ask who Roberts most inspirational player could be and his reply isn’t shocking, Efren “The Magician” Reyes. A lover of One Pocket must have a legend as his inspiration.

Josh comes in Second in the One Pocket event here at The Texas Open, but he is gaining momentum for future events. Frequently you will hear Roberts providing commentary on streaming matches, this girl has learned many important factors in the One Pocket game from Roberts which is priceless information. Moments between matches he is also seen giving fans an autograph or speaking to one of the many who follow his progress. It’s about your integrity and your humbleness to your fan base, sponsors and a nosey reporter who is always watching the players to find out, are you the next amazing person on a long list of examples of who those Junior players strive to be in this world? Do you give back into the sport? This isn’t the last we will see the name Josh Roberts on a list and this quirky reporter looks forward to seeing his name on the next trophy!