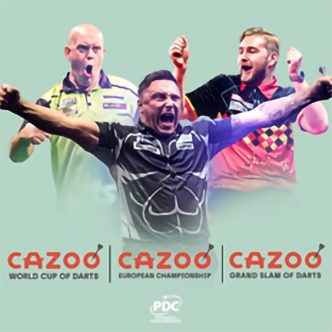 Cazoo, the UK’s leading online car retailer, which makes ordering a car as simple and seamless as buying any other product online today, announces that it has expanded its partnership with Matchroom to become the principal sponsor of the Grand Slam of Darts, World Cup of Darts and European Championship alongside snooker’s Masters, UK Championship and Champion of Champions.

Under a new multi-year deal with the Professional Darts Corporation (PDC), the trio of high-profile darts events will see prominent Cazoo branding on the stage, players’ shirts, in the playing arena and on interview backdrops with extensive live TV coverage through Sky Sports and global broadcasters.

The Cazoo World Cup of Darts will take place from September 9-12 in Jena, Germany, where 32 nations will compete in two-player teams. The Cazoo European Championship, live on ITV4, and Sky Sports-televised Cazoo Grand Slam of Darts will follow as two of the highlights of the Autumn’s darting calendar.

Cazoo has also extended its deal with the World Snooker Tour (WST) and added the Masters, the UK Championship and the Champion of Champions to its current portfolio of snooker properties where it is currently the main sponsor of the Players Championship, Tour Championship and World Grand Prix.

The Champion of Champions promoted by Matchroom Multi Sport, brings together 16 tournament Champions from the past year. The UK Championship is snooker’s longest running ranking event other than the World Championship, and is part of the sport’s Triple Crown series, as is the Masters in London which boasts an elite field of the world’s top 16 players.

Each of these prestigious snooker tournaments, broadcast to a global television audience of up to 500 million fans, will see Cazoo branding on the main set, players’ waistcoats and interview and media conference backdrops. Cazoo will also become the headline sponsor at this year’s FishOMania event, to be staged on Saturday July 24.

Cazoo is pioneering the shift to online car buying and, since launching in 2019, has sold over 25,000 cars to consumers across the UK who have embraced the selection, transparency and convenience of buying quality used cars entirely online. Cazoo is planning to launch in France & Germany by the end of 2021.

Alex Chesterman OBE, Founder & CEO of Cazoo said, “We are excited to be expanding our partnership with Matchroom to launch the Cazoo World Cup of Darts, Cazoo Grand Slam of Darts and Cazoo European Championship with the Professional Darts Corporation later this year and to be extending our deal with the World Snooker Tour to launch three additional Cazoo snooker tournaments. This wider partnership with Matchroom will help to further grow our audience as we build Cazoo into a household brand and continue to deliver the best car buying experience to darts and snooker fans across the UK and Europe.”

Barry Hearn OBE, President of Matchroom said: “It’s fantastic to have a brand like Cazoo involved with us in both snooker and darts and we have thoroughly enjoyed working with Alex and his team, who have proven to be creative and innovative partners. We are now partnering with Cazoo on nine of the most prestigious tournaments and eagerly-awaited events on the snooker and darts calendars as well as for FishOMania. We look forward to introducing the Cazoo brand to our loyal fanbase and to a long and productive relationship.”

Cazoo’s mission is to transform the car buying experience for consumers across the UK and Europe by providing better selection, quality, transparency, convenience, flexibility and peace of mind. Cazoo aims to make buying a car no different to any other product online today, where consumers can simply and seamlessly purchase, finance or subscribe to a car entirely online for either delivery or collection in as little as 72 hours. Cazoo was founded in 2018 by serial entrepreneur Alex Chesterman OBE, has a highly experienced management team and is backed by some of the leading global technology investors.

About the Grand Slam of Darts & PDC
The Professional Darts Corporation introduced the Grand Slam of Darts to its calendar in 2007, with the event accompanying the likes of the World Darts Championship, Premier League and World Matchplay on the PDC’s £14m global circuit. Won six times by Phil Taylor, the Grand Slam of Darts has also been won three times by Michael van Gerwen and twice by Gerwyn Price, the current World Champion, with Portugal’s Jose de Sousa being the reigning champion. The World Cup of Darts was introduced in 2010 and sees two-player teams representing 32 nations competing, with England and the Netherlands winning four times apiece ahead of wins for Scotland in 2019 and Wales in 2020. The European Championship was first staged in 2008 and is staged annually as 32 players compete across four days. The PDC, formed in 1993, now stages over 200 days of darts annually on its circuit of events, and has affiliated development tours in Australia, New Zealand, Asia, North America, the Nordic & Baltic region and the EuroAsian region.

World Snooker Tour is the commercial entity responsible for the commercial exploitation and promotion of professional snooker events and is the custodian of the sport’s commercial rights. Its primary objective is to organise, promote or sanction all professional snooker events globally. Over the past decade the tour has grown dramatically in terms of the number of events, prize money and a worldwide television audience of 500 million.

FishOMania, now over a quarter of a century old, is one of the great summertime sporting occasions. Known as the ‘FA Cup of Fishing’, the competition involves 24 anglers who have qualified through heats across England and Europe, fishing off for a massive £50,000 first prize.

The event gains much of its excitement by abandoning the traditional weigh-in at the conclusion of the match, and instead features weigh-ins every 30 minutes which gives the event a changing leader board that makes the action easy to follow.

FishOMania takes place at Hayfield Lakes, Doncaster and attracts crowds of up to 5,000 angling fans cheering on their favourites throughout the match. Alongside the main event, FishOMania NXTGEN showcases some of the UK’s best up and coming angling talent.